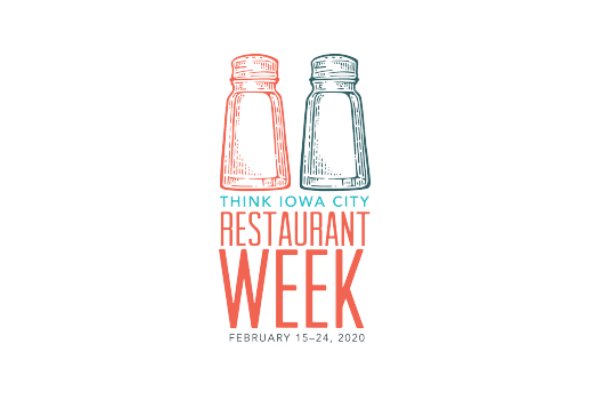 Think Iowa City, the convention & visitors bureau, announced plans for the first annual Think Iowa City Restaurant Week to take place February 15-24. All restaurants in Johnson County are able to participate. The week will kick off with the Think Iowa City Foodie Festival event on February 15.

“Coralville, Iowa City, and the surrounding area have so many fantastic culinary options,” said Monica Nieves, Vice President of Special Events at Think Iowa City. “An event like this has been on the wish list for many residents, visitors, and restaurants for years.”

There are actually three components to the festivities. Dubbed “Foodie February,” and represented by the URL FoodieFebruary.com and hashtag #ICFoodieFeb, Think Iowa City’s social media will feature restaurants and local food options every day in the month of February. The second component is the Restaurant Week, in which any restaurant in Johnson County can elect to participate by providing a pre-set meal selection at a reduced price.

“Restaurant Week is a great way to expose locals to restaurants they haven’t been to yet. There is no fee for the restaurants to participate. This is the opportunity to step out and try something new with no risk and all reward,” added Nieves.

The third component is the Think Iowa City Foodie Festival event on Saturday, February 15 at the Coralville Marriott. This ticketed tasting event brings together some of the best restaurants in the area. Attendees will indulge in many flavors, from appetizers to main dishes to desserts. Cedar Ridge Winery and Distillery will provide samples of a specialty cocktail and wine. Tickets go on sale in early January. Proceeds benefit the Coralville Community Food Bank, North Liberty Community Food Bank, and CommUnity in Iowa City. The Think Iowa City Foodie Festival book-ends Restaurant Week culminating with the Top Chef: Downtown event on February 24 at The Graduate Hotel.

“Top Chef: Downtown is a phenomenal event that sells out each year, featuring the best of Downtown Iowa City. The Foodie Festival will allow the restaurants outside of Downtown to feature their talents,” said Nieves. “All the events together really showcase the amazing food, chefs, and dining experiences we have in Johnson County.”

The Iowa City Downtown District and Think Iowa City partnered on a “Giving Tuesday” dual ticket promotion for Top Chef and Foodie Festival on December 3. Limited to the first 50 participants, buyers of both event tickets will receive a 15% discount. Regular ticket price for each event is $55. Regular tickets for both events don’t go on sale until January, so this is an early chance to buy.

“February is a time of year where you may not naturally want to venture out. Our goal is that the combination of events happening in Foodie February will give locals a reason to explore our robust culinary scene. Dining out helps the local economy and exposes you to new experiences. My hope is you find your new favorite restaurant and dish in our community,” said Nieves.

More information can be found at FoodieFebruary.com. Businesses wanting to participate are urged to contact Monica Nieves at Think Iowa City at 319-337-6592.